In the cemetery, all the white crosses stood in rows, neat chalk marks on a giant scorecard. Paid last respects quietly, without fuss.

Is that what happens to us? A life of conflict with no time for freinds...

...So that when it's done, only our enemies leave roses. 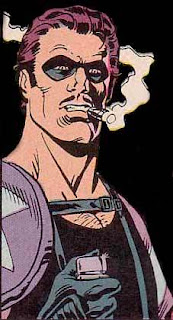 Something in our personalities, perhaps? Some animal urge to fight and struggle, making us what we are?

Unimportant. We do what we have to do.

Others bury their heads between the swollen teats of indulgence and gratification, piglets squirming beneath a sow for shelter...

...And the future is bearing down like and express train.

Blake understood. Treated it like a joke, but he understood. He saw the cracks in society, saw the little men in masks trying to hold it together...

He saw the true face of the twentieth century and chose to become a reflection, a parody of it.

No one else saw the joke. Thats why he was lonely.

Says he feels all alone in a threatening world, where what lies ahead seems cheap and uncertain.

Doctor says "Treatment is simple. Great clown Pagliacci is in town tonight. Go and see him. That should pick you up." 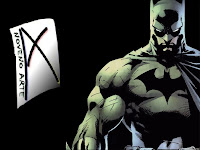